Sideral - presented as part of Sonica 2017 - unmissable for those in the UK! 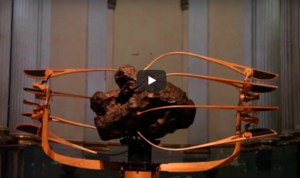 Experience music from a meteorite made by Mexican artists Marcela Armas and Gilberto Esparza.
Having remained behind closed doors at the Natural History Museum, London for 80 years, the meteorite embarks on an unimaginable journey. Leaving the museum for the first time ever, it will travel to Glasgow and appear publicly in Sideral, presented as part of Sonica 2017.
“a bridge between the ear and the touch” Nexus
Presented as a part of Seeing Hearing UK Mexico, a 3-year collaboration between the UK and Mexico made possible with the support of Anglo Arts, the cultural department of The Anglo Mexican Foundation A.C.; British Council Mexico; CMMAS (Centro Mexicano para la Música y las Artes Sonoras) and Cryptic.
http://sonic-a.co.uk/portfolio/sideral/ Fuente: Sonica
Publicado Octubre 4, 2017 Vista para Imprimir